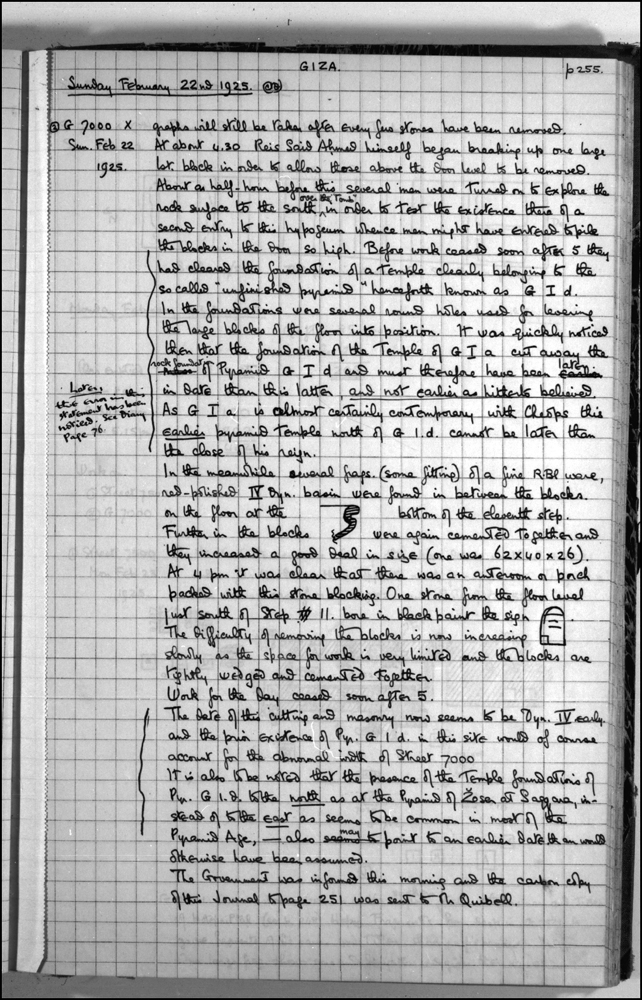 (2) G 7000 X (continued)
graphs will still be taken after every few stones have been removed.
At about 4:30 Reis Said Ahmed himself began breaking up one large limestone block in order to allow those above the door to be removed. About a half-hour before this several men were turned on to explore the rock surface to the south over the tomb in order to test the existence there of a second entry to this hypogeum whence men might have entered to pile the blocks in the door so high. Before work ceased soon after 5 they had cleared the [rock surface northwards from the unfinished pyramid cutting // GAR], henceforth know as G I-d [G I-a // GAR] [cf. Diary, Friday, December 12, 1924, No. (1) // GAR]. [In this rock surface were a number of round holes used as lever holes for moving blocks of stone. // GAR] It was quickly noticed that the [rock cut emplacements of the // GAR] foundations of temple G-Ia [came so close to the unfinished pyramid cutting // GAR] that the latter must therefore be earlier in date than the former. [Note on margin by Greenlees calling attention to the fact that this conclusion had already been reached on December 12, 1924, see Diary of that date. // GAR] As G I-a is certainly contemporaneous with Khufu, this earlier [unfinished pyramid cutting and the holes in the surface to the north // GAR] cannot be later than the close of his reign. [(N.B. The bracketed [words] in the above paragraph are corrections made by GAR on his return)]

[margin note] Later the error in this statement has been noticed. See Diary page 76.

In the meanwhile several fragments (some fitting) of a fine red black ware red polished Dynasty 4 basin were found in between the blocks on the floor at the [ILLUSTRATION] bottom of the eleventh step. Further in the blocks were again cemented together and they increased a good deal in size (one was 62 x 40 x 26).
At 4 p.m. it was clear that there was an anteroom [(?), this is the pit of G 7000 X // GAR] packed with this stone blocking. One stone from the floor level just south of step 11 bore in black paint the sign [GLYPHS]. The difficulty of removing the blocks is now increasing slowly as the space for work is very limited and the blocks are tightly wedged and cemented together.
Work for the day ceased soon after 5.
The date of this cutting and masonry now seems to be Dynasty 4 early and the prior existence of Pyramid G I-d in this site would of course account for the abnormal width of Street G 7000.
It is also to be noted that the presence of the Temple foundations of Pyramid G I-d. to the north as at the Pyramid of Zoser at Saqqara, instead of to the east as seems to be common in most of the Pyramid Age, also may point to an earlier date than would otherwise have been assumed.
The government was informed this morning and the carbon copy of this journal [up to end of Saturday, February 21, 1925 // GAR] was sent to Mr. Quibell.