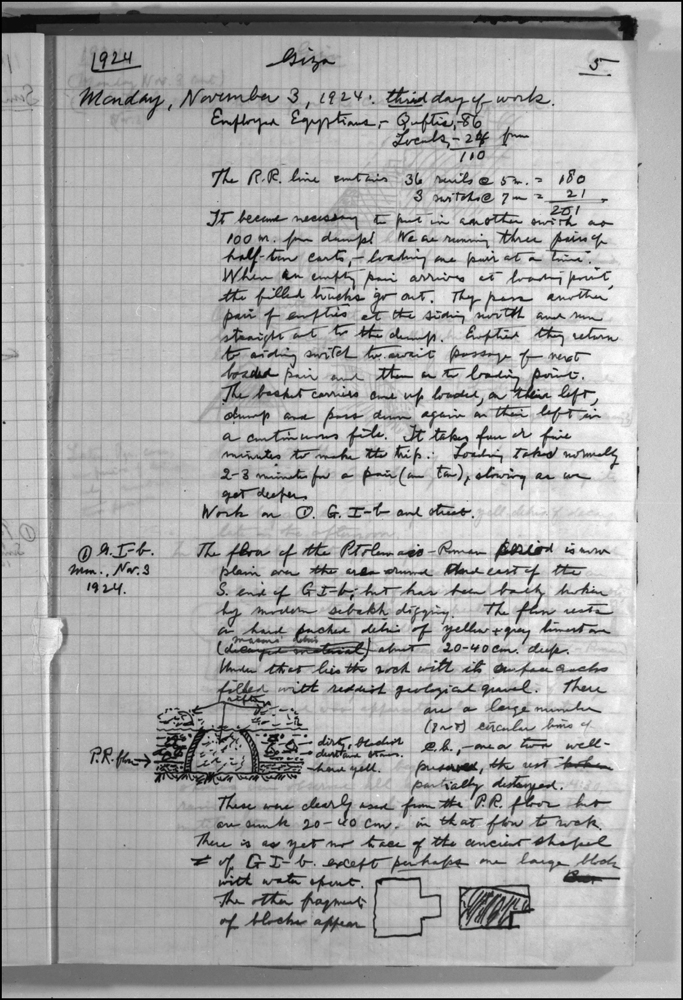 It became necessary to put in another switch at 100 meters from dump! We are [running] pairs of half-ton carts, loading one pair at a time. When an empty pair arrives at loading point, the filled trucks go out. They pass another pair of empties at the siding north and run straight out to the dump. Emptied they return to siding switch to await passage of next loaded pair and then on to loading point. The basket carriers come up loaded, on their left, dump and pass down again [keeping always] on their left in a continuous file. It takes four or five minutes to make the trip. Loading takes normally two to three minutes for a pair (one ton), slowing as we get deeper.

(1) G I-b and Street G 7000
The floor of the Ptolemaic-Roman period is now plain over the area around the end east of the south end of G-Ib, but has been badly broken by modern sebbakh digging. The floor rests on hard packed debris of yellow and gray limestone (mason's debris) about 20 - 40 cm deep. Under that lies the rock with its surface cracks filled with reddish geological gravel.

There are a large number (seven to eight) circular bins of crude brick - one or two well preserved, the rest partially destroyed. These were clearly used from the Ptolemaic-Roman floor but are sunk 20 - 40 cm in that floor to rock. There is as yet no trace of the ancient chapel of G I-b except perhaps one large block with water spout [ILLUSTRATION]. The other fragments of blocks appear.