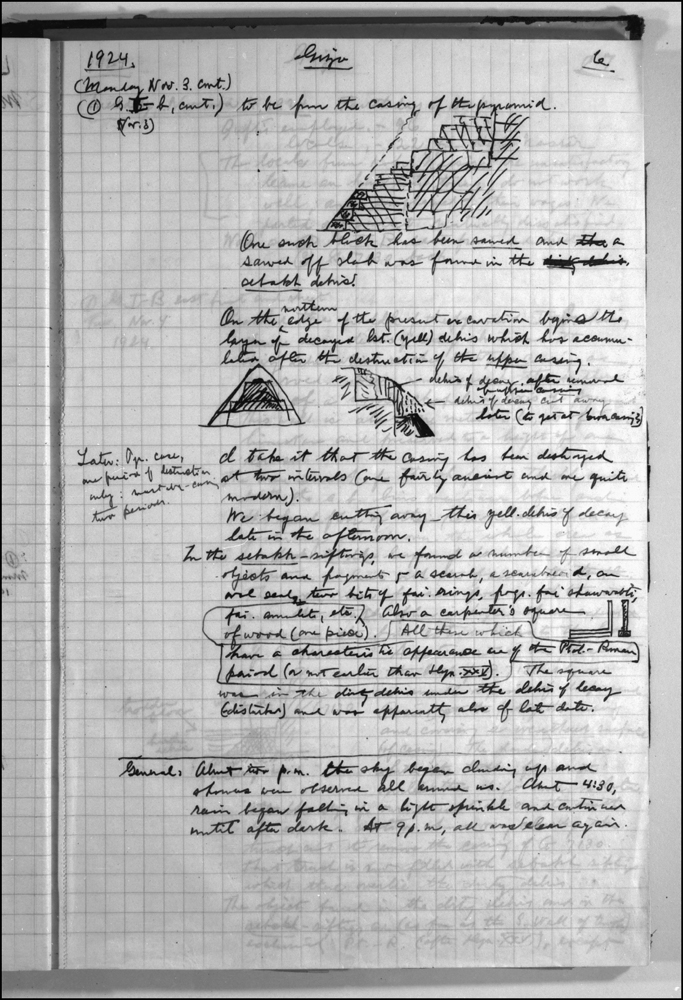 (1) G I-b and Street G 7000 (continued)
to be from the casing of the pyramid. One such block has been sawed and a sawed off slab was found in the sebbakh debris.
On the northern edge of the present excavation begins the layer of decayed limestone (yellow) debris which has accumulated after the destruction of the upper casing.

I take it that the casing has been destroyed at two intervals (one fairly ancient and one quite modern).
Later: Op. case, one period of destruction only, mastaba casing two periods. [Later: Pyramid casing shows one period of destruction only: The mastaba casing, two periods. The second destruction of pyramid masonry involved the core only.]
We began cutting away this yellow debris of decay late in the afternoon.
In the sebbakh siftings, we found a number of small objects and fragments: a scarab, a scaraboid, an oval seal, two bits of faience rings, fragments of faience ushabtis, faience amulets, etc. All these which have a characteristic appearance are of the Ptolemaic-Roman period (or not earlier than Dynasty 25). Also a carpenter's square of wood (one piece) [ILLUSTRATION].
The square was in the dirty debris under the debris of decay (disturbed) and was apparently also of late date.

General: About 2 p.m. the sky began clouding up and showers were observed all around us. About 4:30, rain began falling in a light sprinkle and continued until after dark. At 9 p.m. all was clear again.