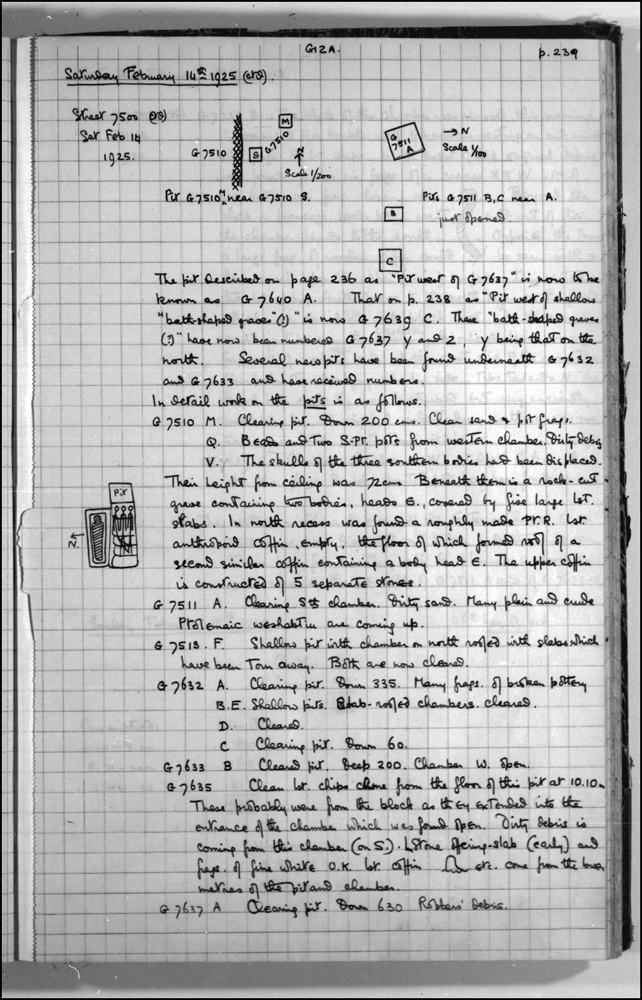 In detail work on the pits is as follows:
G 7510 M: Clearing pit. Down 200 cm. Clear sand and pit fragments.
G 7510 Q: Beads and two Saite-Ptolemaic pots from western chamber. Dirty debris.
G 7510 Y: The skulls of three southern bodies had been displaced.
Their height from ceiling was 72 cm. Beneath them is a rock cut grave containing two bodies, heads east, covered by five large limestone slabs. In north recess was found a roughly made Ptolemaic-Roman limestone anthropoid coffin, empty, the floor of which formed roof of a second similar coffin containing a body, head east. The upper coffin is constructed of five separate stones.
G 7511 A: Clearing fifth chamber. Dirty sand. Many plain and crude Ptolemaic ushabtis are coming up.
G 7513 F: Shallow pit with chamber on north roofed with slabs which have been torn away. Both are now cleared.
G 7632 A: Clearing pit. Down 335. Many fragments of broken pottery.
G 7632 B: E. Shallow pits. Slab-roofed chambers, cleared.
G 7632 D: Cleared.
G 7632 C: Clearing pit. Down 60.
G 7633 B: Cleared pit. Deep 200. Chamber [at] west open.
G 7635 Clean limestone chips came from the floor of this pit at 10.10 meters. These probably were from the block as they extended into the entrance of the chamber which was found open. Dirty debris is coming from this chamber (on South). Limestone offering slab (early) and fragments of fine white Old Kingdom limestone coffin [ILLUSTRATION] etc. come from the lower meters of the pit and chamber.
G 7637 A: Clearing pit. Down 630. Robbers' debris.