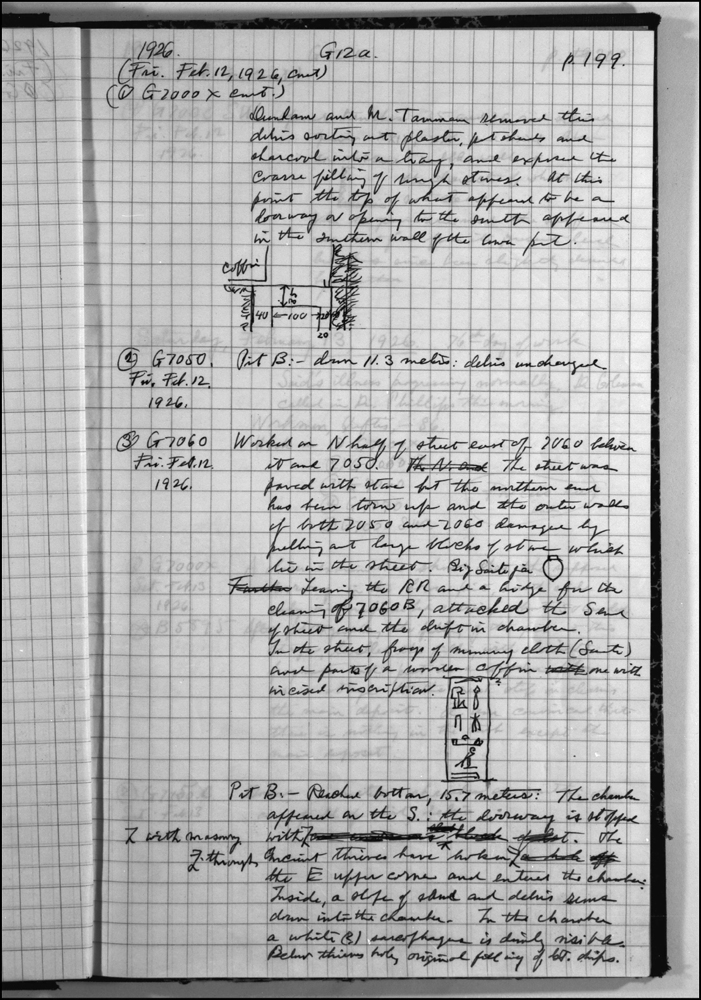 (1) G 7000 X (continued)
Dunham and M. Tammam removed this debris sorting out plaster, potsherds and charcoal into a tray, and exposed the coarse filling of rough stones. At this point the top of what appeared to be a doorway or opening to the south appeared in the southern wall of the lower pit.
[ILLUSTRATION]

(3) G 7060
Worked on north half of street east of G 7060 between it and G 7050. The street was paved with stone but the northern end has been torn up and the outer walls of both G 7050 and G 7060 damaged by pulling out large blocks of stone which lie in the street. Big Saite jar [ILLUSTRATION].
Leaving the Railroad and a bridge for the cleaning of G 7060 B, attacked the sand of street and the drift in chamber. In the street, fragments of mummy cloth (Saite) and parts of a wooden coffin, one with incised inscription. [GLYPHS]
Pit G 7060 B: Reached bottom, 15.7 meters. The chamber appeared on the south. The doorway is stopped with masonry. The ancient thieves have broken through the east upper corner and entered the chamber. Inside, a slope of sand and debris runs down into the chamber. In the chamber a white(?) sarcophagus is dimly visible. Below thieves hole, original filling of limestone chips.