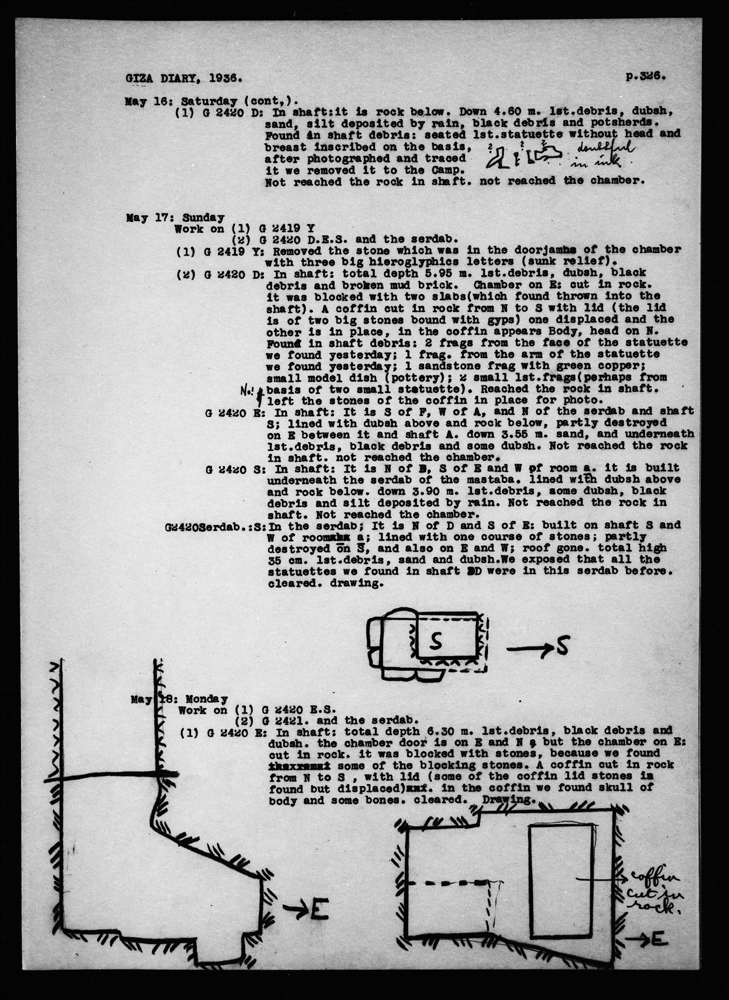 (1) G 2420 (continued)
G 2420 D: In shaft. It is rock below. Down 4.60 meters, limestone debris, dubsh, sand, silt deposited by rain, black debris and potsherds. Found in shaft debris: seated limestone statuette [36-5-32] without head and breast inscribed on the basis. After photographed and traced it we removed it to the Camp. Not reached the rock in shaft. Not reached the chamber.
[GLYPHS] [Inti(?)]

(1) G 2419
G 2419 Y: Removed the stone which was in the doorjambs of the chamber with three big hieroglyphic letters (sunk relief).

(2) G 2420
G 2420 D: In shaft. Total depth 5.95 meters, limestone debris, dubsh, black debris and broken mud brick. Chamber on east cut in rock. It was blocked with two slabs (which found thrown into the shaft). A coffin cut in rock from north to south with lid (the lid is of two big stones bound with gypsum) one displaced and the other is in place. In the coffin appears body, head on north. Found in shaft debris: two fragments from the face of the statuette we found yesterday [36-5-32], one fragment from the arm of the statuette we found yesterday [36-5-31], one sandstone fragment with green copper [36-5-33], small model dish (pottery) [36-5-36], two small limestone fragments [36-5-34, 36-5-35] (perhaps from basis of two small statuette[s]). Reached the rock in shaft. Left the stones of the coffin in place for photo.

G 2420 E: In shaft. It is south of F, west of A, and north of the serdab and shaft S. Lined with dubsh above and rock below, partly destroyed on east between it and shaft A. Down 3.55 meters, sand, and underneath limestone debris, black debris and some dubsh. Not reached the rock in shaft. Not reached the chamber.

G 2420 S: In shaft. It is north of D, south of E and west of room a. It is built underneath the serdab of the mastaba. Lined with dubsh above and rock below. Down 3.90 meters, limestone debris, some dubsh, black debris and silt deposited by rain. Not reached the rock in shaft. Not reached the chamber.

G 2420 serdab S: In the serdab. It is north of D and south of E. Built on shaft S and west of room a. Lined with one course of stones, partly destroyed on south, and also on east and wet, roof gone. Total high 35 cm, limestone debris, sand and dubsh. We exposed that all the statuettes we found in shaft D were in this serdab before. Cleared. Drawing.

(1) G 2420
G 2420 E: In shaft. Total depth 6.30 meters, limestone debris, black debris and dubsh. The chamber door is on east and north but the chamber on east cut in rock. It was blocked with stones, because we found some of the blocking stones. A coffin cut in rock from north to south, with lid (some of the coffin lid stones is found but displaced). In the coffin we found skull of body and some bones [36-5-38a]. Cleared. Drawing.