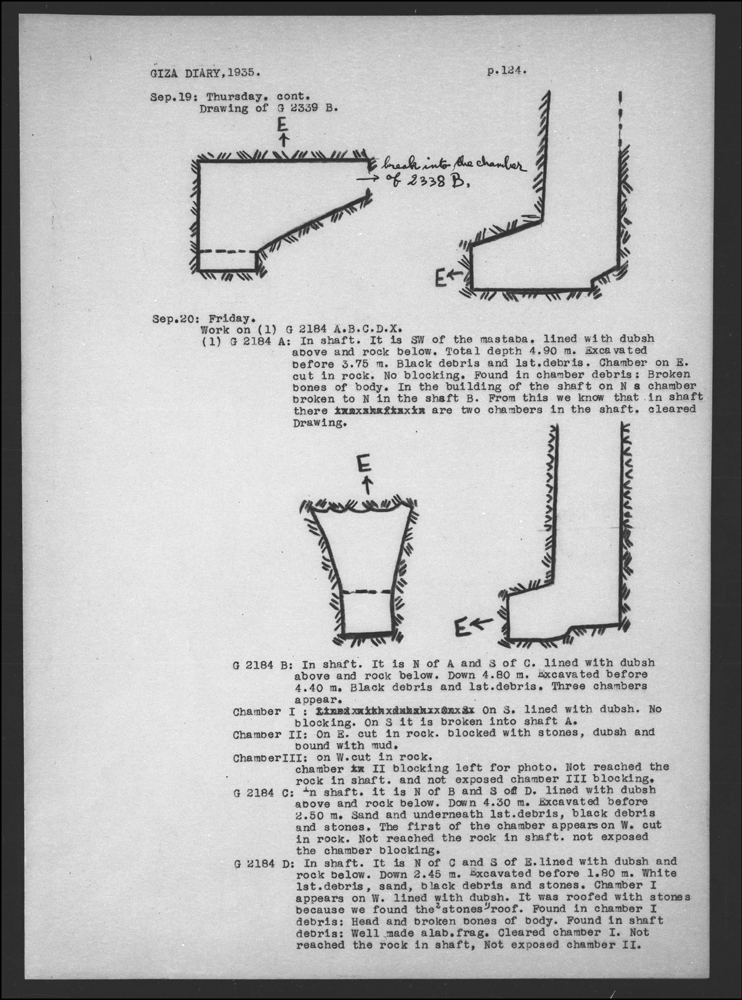 (1) G 2184
G 2184 A: In shaft. It is southwest of the mastaba. Lined with dubsh above and rock below. Total depth 4.9 meters. Excavated before 3.75 meters. Black debris and limestone debris. Chamber on east. Cut in rock. No blocking. Found in chamber debris: broken bones of body. In the building of the shaft on north a chamber broken to north in the shaft B. From this we know that in shaft there are two chambers in the shaft. Cleared. Drawing.

G 2184 B: In shaft. It is north of A and south of C. Lined with dubsh above and rock below. Down 4.8 meters. Excavated before 4.4 meters. Black debris and limestone debris. Three chambers appear.
Chamber I: On south lined with dubsh. No blocking. On south it is broken into shaft A.
Chamber II: On east. Cut in rock. Blocked with stones, dubsh and bound with mud.
Chamber III: On west cut in rock.
Chamber II blocking left for photo. Not reached the rock in shaft and not exposed chamber III blocking.

G 2184 C: In shaft. It is north of B and south of D. Lined with dubsh above and rock below. Down 4.3 meters. Excavated before 2.5 meters. Sand and underneath limestone debris, black debris and stones. The first of the chamber appears on west. Cut in rock. Not reached the rock in shaft. Not exposed the chamber blocking.

G 2184 D: In shaft. It is north of C and south of E lined with dubsh and rock below. Down 2.45 meters. Excavated before 1.8 meters. White limestone debris, sand, black debris and stones. Chamber I appears on west lined with dubsh. It was roofed with stones because we found the stones roof. Found in chamber I debris: head and broken bones of body. Found in shaft debris: well made alabaster fragments. Cleared chamber I. Not reached the rock in shaft. Not exposed chamber II.