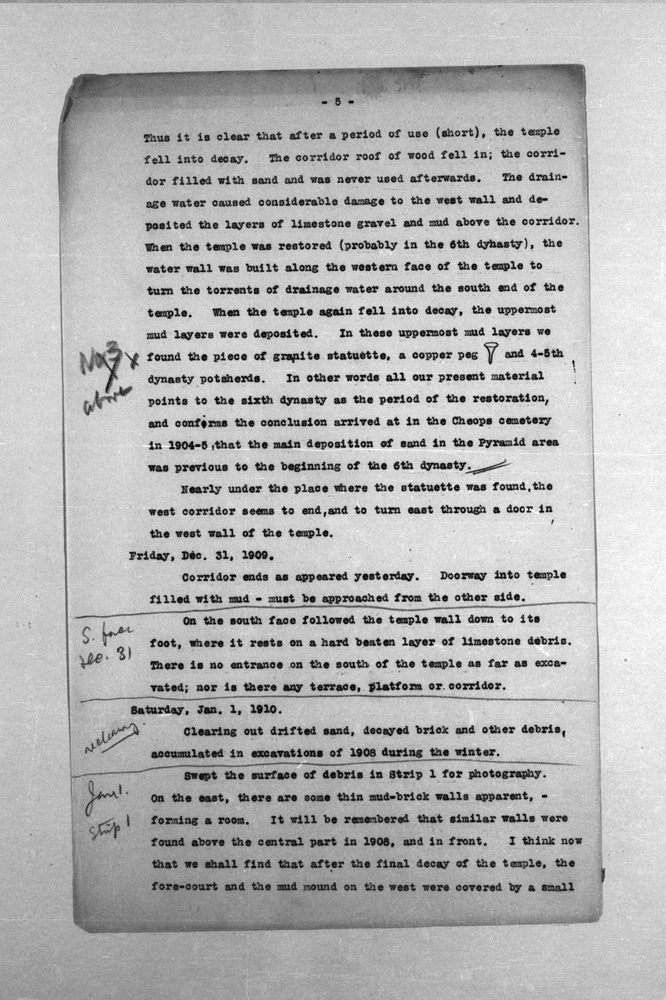 Thus it is clear that after a period of use (short), the temple fell into decay. The corridor roof of wood fell in; the corridor filled with sand and was never used afterwards. The drainage water caused considerable damage to the west wall and deposited the layers of limestone gravel and mud above the corridor. When the temple was restored (probably in Dynasty 6), the water wall was built along the western face of the temple to turn the torrents of drainage water around the south end of the temple. When the temple again fell into decay, the uppermost mud layers were deposited. In these uppermost mud layers we found the piece of granite statuette [margin note in red] (no. 3 [= published no. 44] above) [end margin note], a copper peg [ILLUSTRATION] and Dynasty 4th-5th potsherds. In other words all of present material points to Dynasty 6 as the period of the restoration, and confirms the conclusion arrived at in the Khufu cemetery in 1904 - 5, that the main deposition of sand in the pyramid area was previous to the beginning of Dynasty 6.
Nearly under the place where the statuette was found, the west corridor seems to end, and to turn east through a door in the west wall of the temple.

Corridor ends as appeared yesterday. Doorway into temple filled with mud - must be approached from the other side.
On the south face followed the temple wall down to its foot, where it rests on a hard beaten layer of limestone debris. There is no entrance on the south of the temple as far as excavated; nor is there any terrace, platform or corridor.

Clearing out drifted sand, decayed brick and other debris, accumulated in excavations of 1908 during the winter.
Swept the surface of debris in strip 1 for photography. On the east, there are some thin mud brick walls apparent - forming a room. It will be remembered that similar walls were found above the central part in 1908, and in front. I think now that we shall find that after the final decay of the temple, the fore court and the mud mound on the west were covered by a small