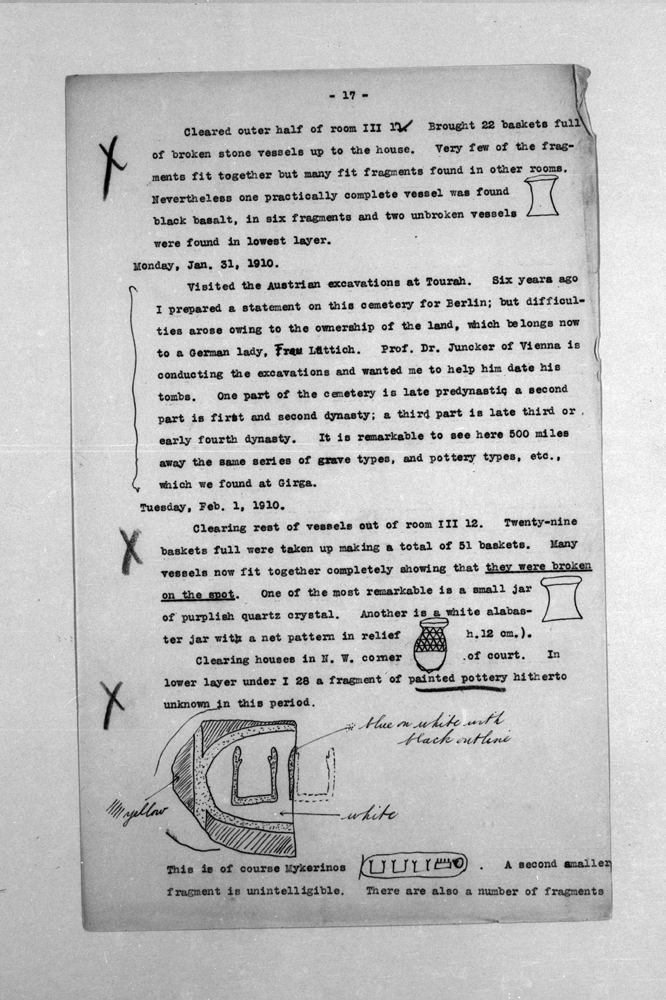 Cleared outer half of room III 12. Brought twenty-two baskets full of broken stone vessels up to the house. Very few of the fragments fit together but many fit fragments found in other rooms. Nevertheless one practically complete vessel was found in black basalt, in six fragments and two unbroken vessels were found in lowest layer. [ILLUSTRATION]

Visited the Austrian excavations at Tura. Six years ago I prepared a statement on this cemetery for Berlin; but difficulties arose owing to the ownership of the land, which belongs now to a German lady, Frau Luttich. Professor Dr. Junker of Vienna is conducting the excavations and wanted me to help him date his tombs. One part of the cemetery is late pre-dynastic, a second part is First and Second Dynasty; a third part is late Third or early Fourth Dynasty. It is remarkable to see here five hundred (500) miles away the same series of grave types, and pottery types, etc. which we found at Girga.

Clearing rest of vessels out of room III 12. Twenty-nine baskets full were taken up making a total of fifty-one baskets. Many vessels now fit together completely showing that they were broken on the spot. One of the most remarkable is a small jar of purplish quartz crystal. Another is a white alabaster jar [ILLUSTRATION] with a net pattern in relief, [ILLUSTRATION] (h. 12 cm)

Clearing houses in northwest corner of court. In lower layer under I 28 a fragment of painted pottery hitherto unknown in this period.

This is of course Menkaure [cartouche] [GLYPHS]. A second smaller fragment is unintelligible. There are also a number of fragments