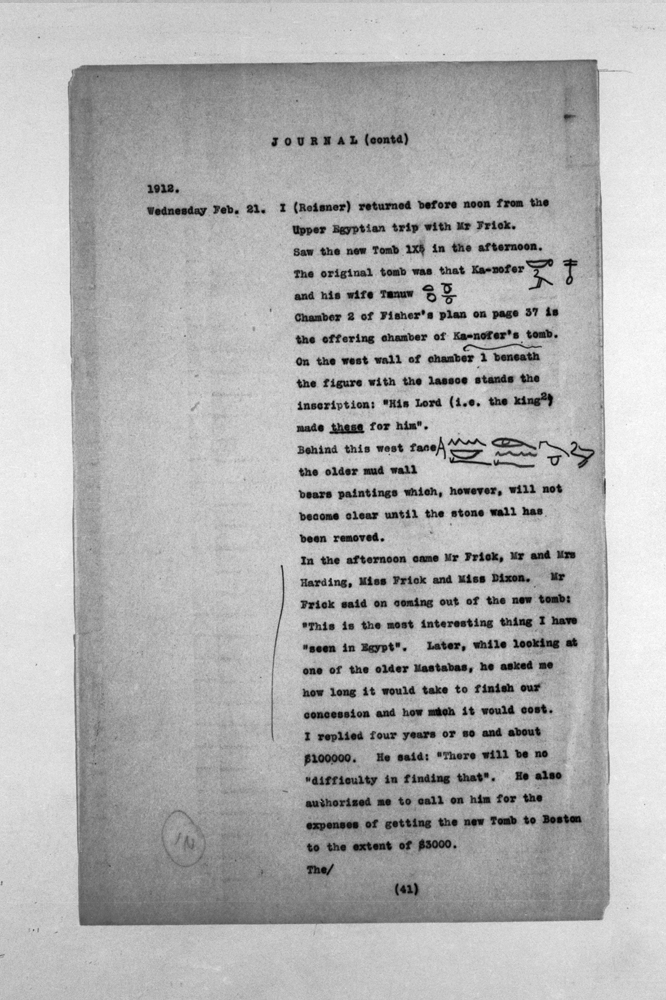 I (Reisner) returned before noon from the Upper Egypt trip with Mr. Frick. Saw the new tomb IX 5 [= G 2184] in the afternoon. The original tomb was that Ka-nefer [Kanefer] [GLYPHS] and his wife Tanuw [Nuut] [GLYPHS]
Chamber 2 of Fisher's plan on page 37 is the offering chamber of Ka-Nefer's tomb. On the west wall of chamber 1 beneath the figure with the lasso stand the inscription: "His Lord (i.e. the king?) made these for him" [GLYPHS] Behind this west face the older mud wall bears paintings which, however, will not become clear until the stone wall has been removed.

In the afternoon came Mr. Frick, Mr. and Mrs. Harding, Miss Frick, and Miss Dixon. Mr. Frick said on coming out of the new tomb "This is the most interesting thing I have seen in Egypt". Later, while looking at one of the older mastabas, he asked me how long it would take to finish our concession and how much it would cost. I replied four years or so and about $100,000. He said, "There will be no difficulty in finding that". He also authorized me to call on him for the expenses of getting the new tomb to Boston to the extent of $3000.
The