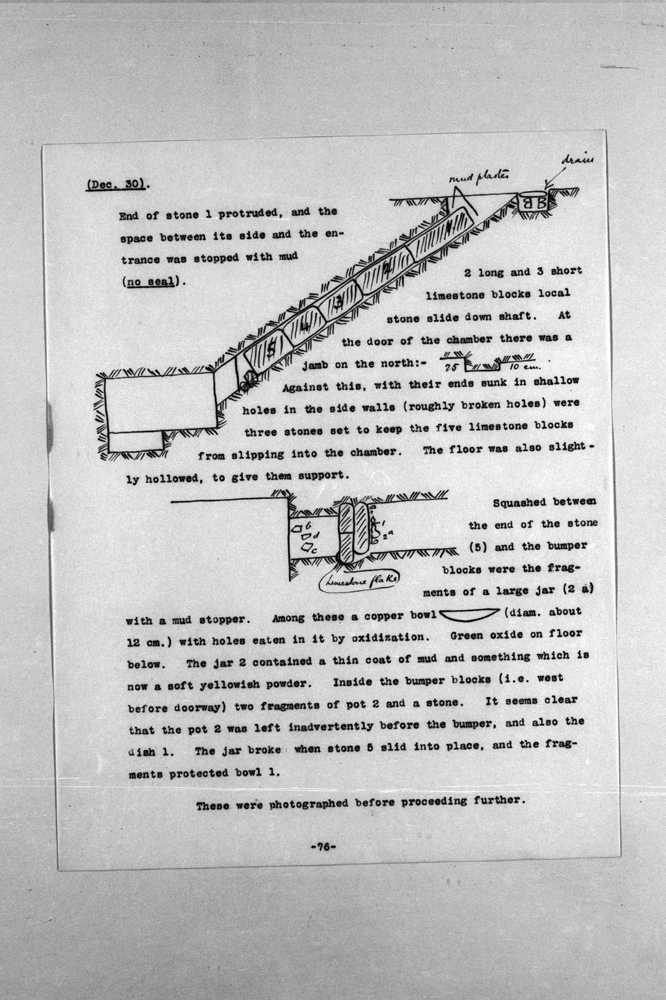 [G 2381 A, continued]
[ILLUSTRATION] End of stone 1 protruded, and the space between its side and the entrance was stopped with mud (no seal). Two long and three short limestone blocks local stone slide down shaft. At the door of the chamber there was a jamb on the north: [ILLUSTRATION]. Against this, with their ends sunk in shallow holes in the side walls (roughly broken holes) were three stones set to keep the five limestone blacks from slipping into the chamber. The floor was also slightly hollowed, to give them support.
[ILLUSTRATION] Squashed between the end of the stone (5) [see first illustration on this page] and the bumper blocks were the fragments of a large jar (2a) [see previous illustration] with a mud stopper. Among these a copper bowl [ILLUSTRATION] (diameter about 12 cm) with holes eaten in it by oxidization. Green oxide on floor below. The jar 2 contained a thin coat of mud and something which is now a soft yellowish powder. Inside the bumper blocks (i.e., west before doorway) two fragments of pot 2 and a stone. It seems clear that the pot 2 was left inadvertently before the bumper, and also the dish 1. The jar broke when stone 5 slid into place and the fragments protected bowl 1.
These were photographed before proceeding further.