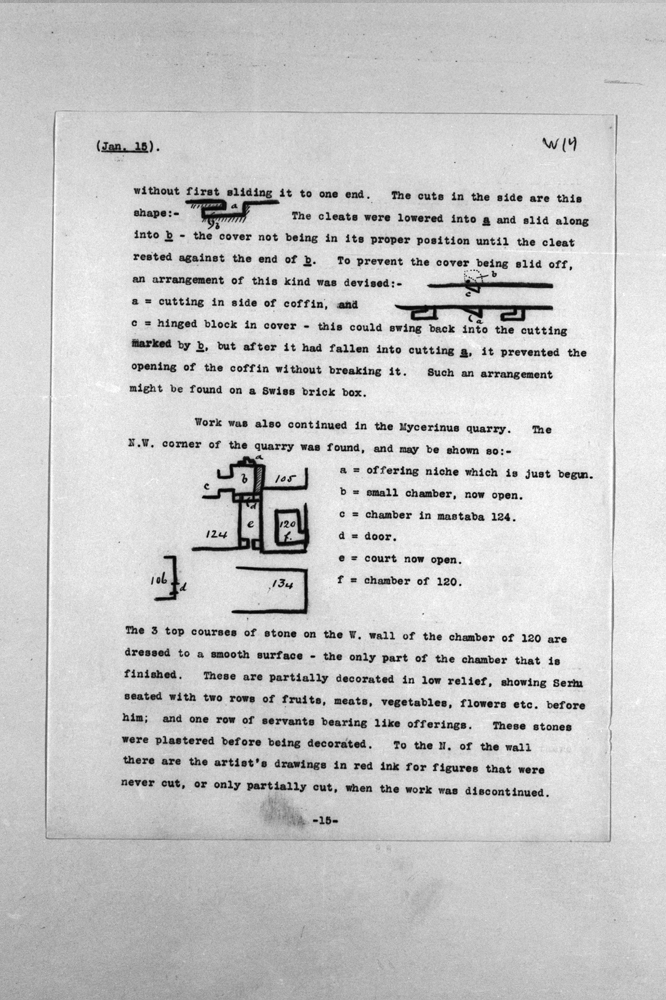 [G 2335 A (continued)]
without first sliding it to one end. The cuts in the side are this shape: [ILLUSTRATION]. The clears were lowered into a and slid along into b - the cover not being in its proper position until the cleat rested against the end of b. To prevent the cover being slid off, an arrangement of this kind was devised: [ILLUSTRATION] a = cutting in side of coffin, and c = hinged block in cover - this could swing back into the cutting marked by b, but after it had fallen into cutting a, it prevented the opening of the coffin without breaking it. Such an arrangement might be found on a Swiss brick box.

Work was also continued in the Menkaure quarry. The northwest corner of the quarry was found, and may be shown so:

The three top courses of stone on the west wall of the chamber of 120 [MQ 120] are dressed to a smooth surface - the only part of the chamber that is finished. These are partially decorated in low relief, showing Serhu [Serehu] seated with two rows of fruits, meats, vegetables, flowers, etc before him; and one row of servants bearing like offerings. These stones were plastered before being decorated. To the north of the wall there are the artist's drawing in red ink for figures that were never cut, or only partially cut, when the work was discontinued.