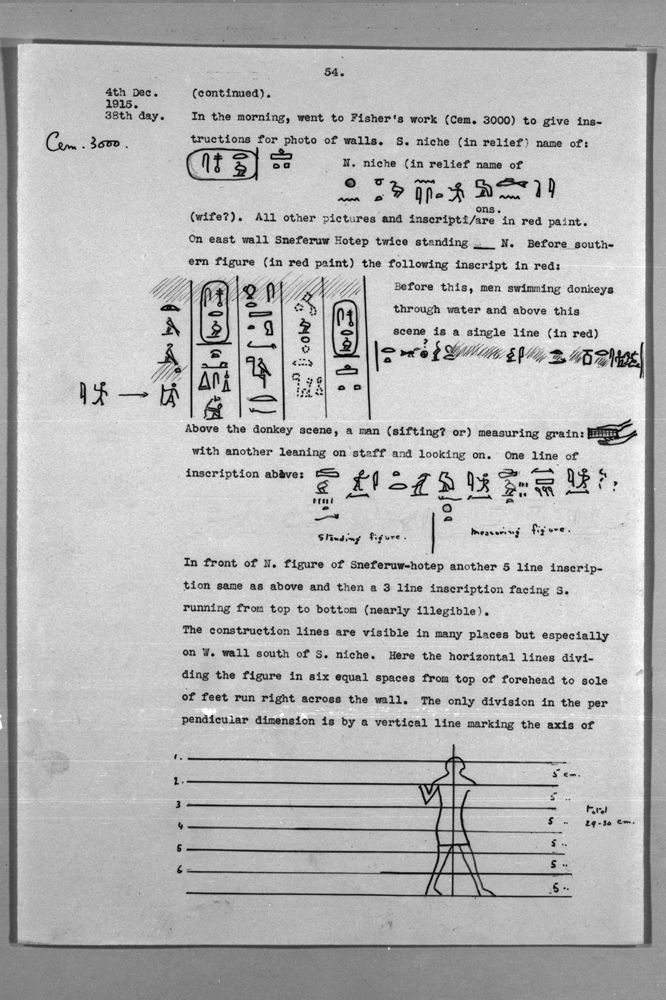 In the morning, went to Fisher's work (Cemetery 3000) to give instructions for photo of walls. [G 3008] South niche (in relief) name of [GLYPHS] [Sneferuhetep]. North niche (in relief) name of [GLYPHS] [Khenut Inti] (wife?). All other pictures and inscriptions are in red paint. On east wall Sneferuw Hotep [Sneferuhetep] twice standing facing north. Before southern figure (in red paint) the following inscription in red [ILLUSTRATION]. Before this, men swimming donkeys through water and above this scene is a single line (in red) [ILLUSTRATION/GLYPHS]. Above the donkey scene, a man (sifting? or) measuring grain [ILLUSTRATION] with another leaning on staff and looking on. One line of inscription above [GLYPHS].
In front of north figure of Sneferuw-hotep another five line inscription same as above and then a three line inscription facing south running from top to bottom (nearly illegible).
The construction lines are visible in many places but especially on west wall south of southern niche. Here the horizontal lines dividing the figure in six equal spaces from top of forehead to sole of feet run right across the wall. The only division in the perpendicular dimension is by a vertical line marking the axis of