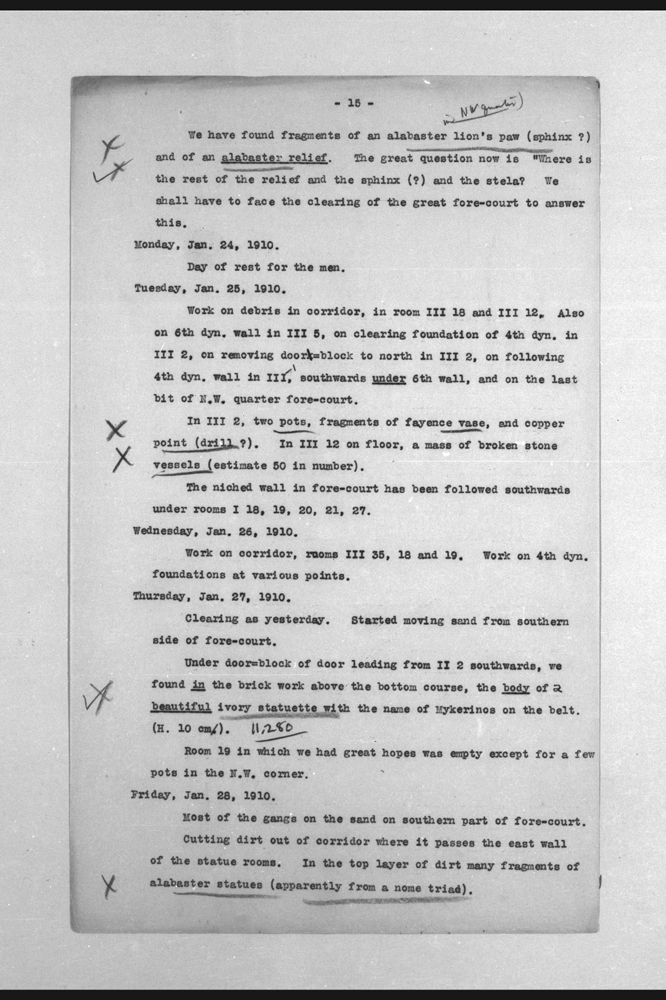 We have found fragments of an alabaster lion's paw (sphinx?) [margin note in pencil] (in northwest quarter) [end margin note] and of an alabaster relief. The great question now is "Where is the rest of the relief and the sphinx (?) and the stela?" We shall have to face the clearing of the great fore court to answer this.

Work on debris in corridor, in room III 18 and III 12. Also on Dynasty 6 wall in III 5, on clearing foundation of Dynasty 4, in III 2, on removing door = block to north in III 2, on following Dynasty 4 wall in III, southwards under Dynasty 6 wall, and on the last bit of northwest quarter fore court.
In III 2, two pots, fragments of faience vase, and copper point (drill?). In III 12 on floor, a mass of broken stone vessels (estimated fifty in number).
The niched wall in fore court has been followed southwards under room I 18, 19, 20, 21, 27.

Work on corridor, rooms III 35, 18 and 19.
Work on Dynasty 4 foundations at various points.

Clearing as yesterday. Started moving sand from southern side of fore court.
Under door block of door leading from II 2 southwards, we found in the brick work above the bottom course, the body of two beautiful ivory statuette with the name of Menkaure on the belt (H. 10 cm) [added in red] [MFA] 11.280 [end added in red]
Room 19 in which we had great hopes was empty except for a few pots in the northwest corner.

Most of the gangs on the sand on southern part of fore court.
Cutting dirt out of corridor where it passes the east wall of the statue rooms. In the top layer of dirt many fragments of alabaster statues (apparently from a nome triad).