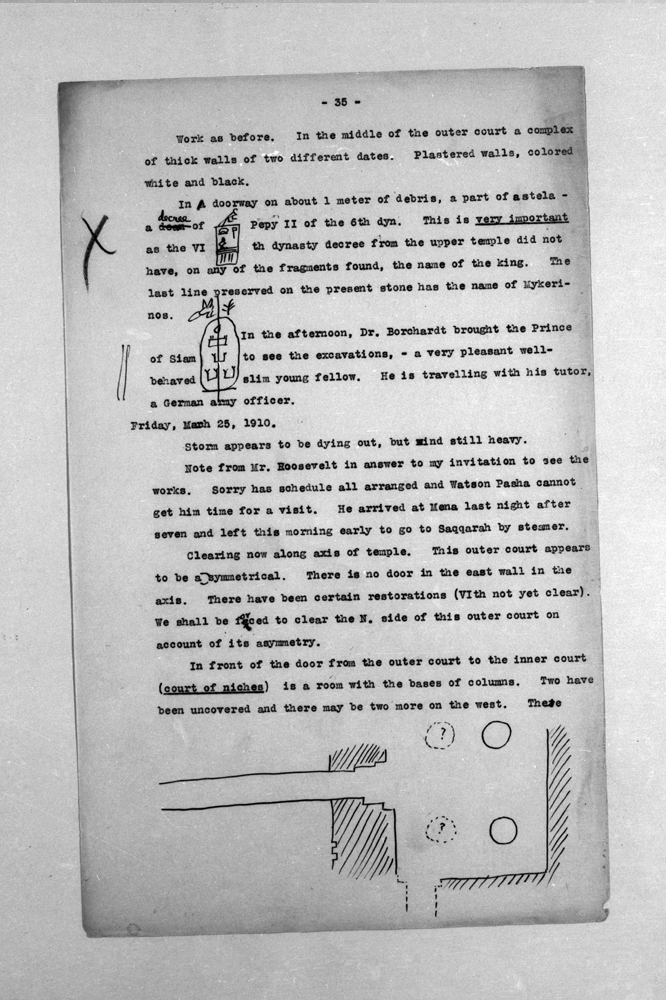 Work as before.
In the middle of the outer court a complex of thick walls of two different dates. Plastered walls, colored white and black.
In a doorway on about 1 meter of debris, a part of a stela - a decree of [ILLUSTRATION with GLYPHS] Pepy II of Dynasty 6. This is very important as Dynasty 6 decree from the upper temple did not have, on any of the fragments found, the name of the king. The last line preserved on the present stone has the name of Menkaure. [ILLUSTRATION with GLYPHS]

In the afternoon, Dr. Borchardt brought the Prince of Siam to see the excavations - a very pleasant well behaved slim young fellow. He is travelling with his tutor, a German army officer.

Storm appears to be dying out, but wind still heavy.

Note from Mr. Roosevelt in answer to my invitation to see the works. Sorry has schedule all arranged and Watson Pasha cannot get him time for a visit. He arrived at Mena last night after seven and left this morning early to go to Saqqara by steamer.

Clearing now along axis of temple. This outer court appears to be asymmetrical. There is no door in the east wall in the axis. There have been certain restorations (6th not yet clear). We shall be forced to clear the north side of this outer court on account of its asymmetry.
In front of the door from the outer court to the inner court (court of niches) is a room with the bases of columns. Two have been uncovered and there may be two more on the west. These
[ILLUSTRATION]