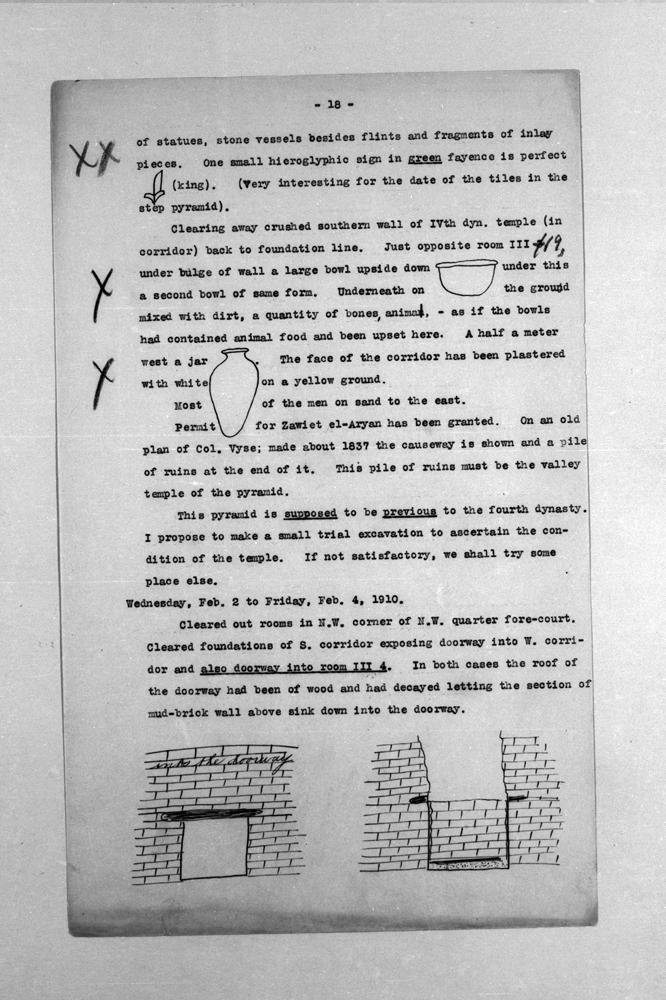 of statues, stone vessels besides flints and fragments of inlay pieces. One small hieroglyphic sign in green faience is perfect [GLYPHS](king). (Very interesting for the date of the tiles in the step pyramid.)

Clearing away crushed southern wall of Dynasty 4 temple (in corridor) back to foundation line. Just opposite room III, 19, under bulge of wall a large bowl upside down [ILLUSTRATION] under this a second bowl of same form. Underneath on the ground mixed with dirt, a quantity of bones, animal - as if the bowls had contained animal food and been upset here. A half a meter west a jar. [ILLUSTRATION] The face of the corridor has been plastered with white on a yellow ground.

Most of the men on sand to the east.

Permit for Zawiet el-Aryan has been granted. On an old plan of Col. Vyse; made about 1837 the causeway is shown and a pile of ruins at the end of it. This pile of ruins must be the valley temple of the pyramid.
This pyramid is supposed to be previous to Dynasty 4. I propose to make a small trial excavation to ascertain the condition of the temple. If not satisfactory, we shall try some place else.

Cleared out rooms in northwest corner of northwest quarter fore court. Cleared foundations of south corridor exposing doorway into west corridor and also doorway into room III4. In both cases the roof of the doorway had been of wood and had decayed letting the section of mud brick wall above sink down into the doorway.