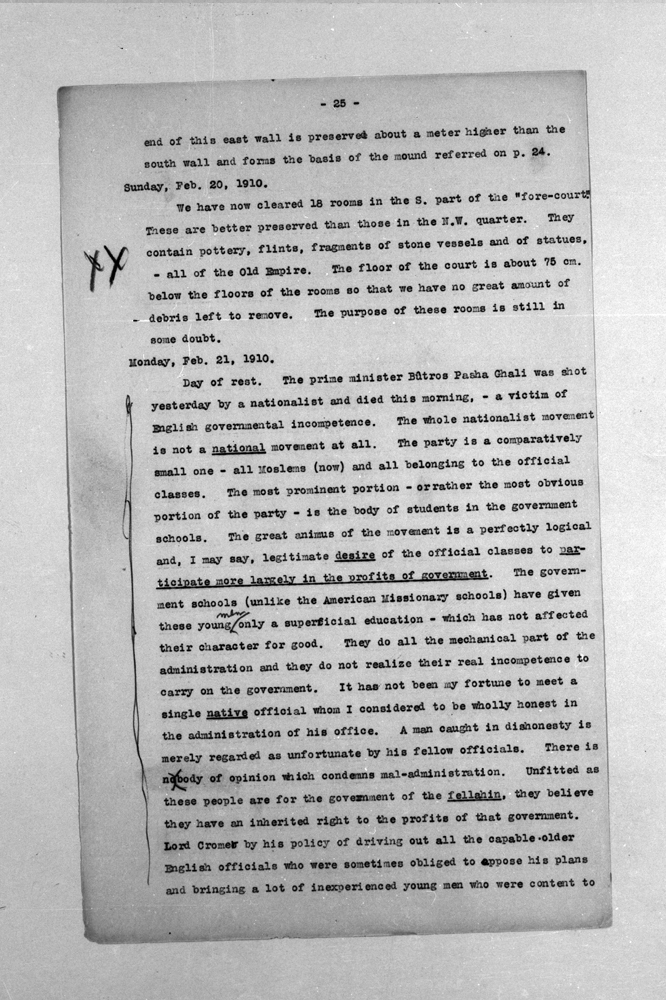 end of this east wall is preserved about a meter higher than the south wall and forms the basis of the mound referred to on page 24.

We have now cleared eighteen rooms in the south part of the "fore court". These are better preserved than those in the northwest quarter. They contain pottery, flints, fragments of stone vessels and of statues - all of the Old Kingdom. The floor of the court is about 75 cm, below the floors of the rooms so that we have no great amount of debris left to remove. The purpose of these rooms is still in some doubt.

Day of rest. The prime minister Butros Pasha Ghali was shot yesterday by a nationalist and died this morning - a victim of English governmental incompetence. The whole nationalist movement is not a national movement at all. The party is a comparatively small one - all Moslems (now) and all belonging to the official classes. The most prominent portion - or rather the most obvious portion of the party - is the body of students in the government schools. The great animus of the movement is a perfectly logical and, I may say, legitimate desire of the official classes to participate more largely in the profits of the government. The government schools (unlike the American Missionary schools) have given these young men only a superficial education - which has not affected their character for good. They do all the mechanical part of the administration and they do not realize their real incompetence to carry on the government. It has not been my fortune to meet a single native official whom I considered to be wholly honest in the administration of his office. A man caught in dishonesty is merely regarded as unfortunate by his fellow officials. There is nobody of opinion which condemns mal-administration. Unfitted as these people are for the government of the Fellaheen, they believe they have an inherited right to the profits of that government. Lord Cromer by his policy of driving out all the capable older English officials who were sometime obliged to oppose his plans and bringing a lot of inexperienced young men who were content to