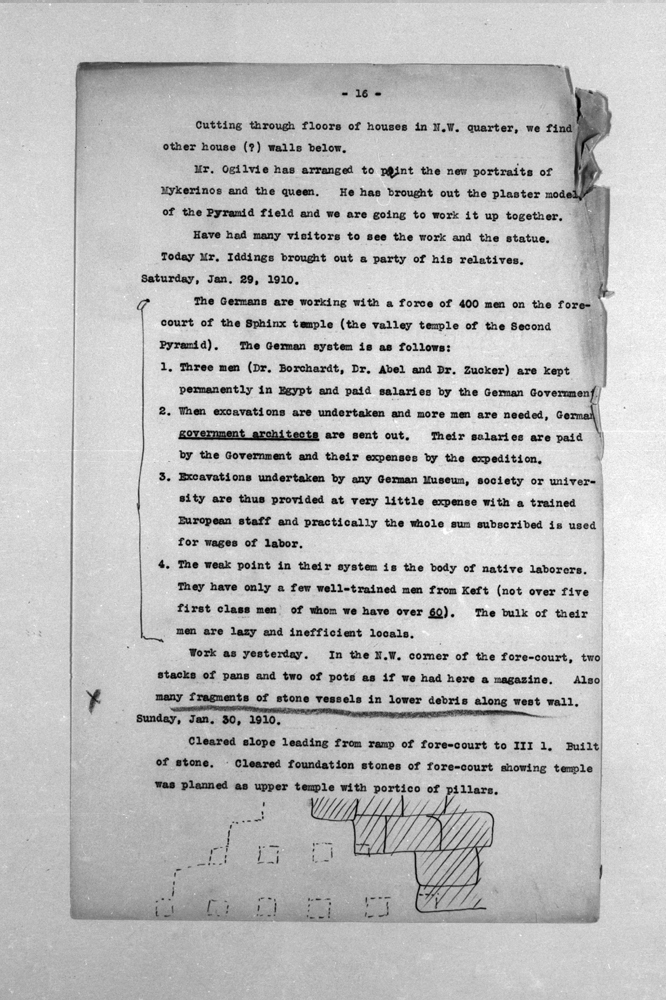 Cutting through floors of houses in northwest quarter, we find other house (?) walls below.

Mr. Ogilvie has arranged to paint the new portraits of Menkaure and the queen. He has brought out the plaster model of the pyramid field and we are going to work it up together.
Have had many visitors to see the work and the statue. Today Mr. Iddings brought out a party of his relatives.

The Germans are working with a force of four hundred (400) men on the fore court of the Sphinx temple (the valley of the second pyramid). The German system is as follows:
1. Three men (Dr. Borchardt, Dr. Abel and Dr. Zucker) are kept permanently in Egypt and paid salaries by the German government.
2. When excavations are undertaken and more men are needed, German government architects are sent out. Their salaries are paid by the government and their expenses by the expedition.
3. Excavations undertaken by any German museum, society or university are thus provided at very little expense with a trained European staff and practically the whole sum subscribed is used for wages of labor.
4. The weak point in their system is the body of native laborers. They have only a few well-trained men from Quft (not over five first class men of whom we have over sixty). The bulk of their men are lazy and inefficient locals.

Work as yesterday. In the northwest corner of the fore court, two stacks of pans and two of pots as if we had here a magazine. Also many fragments of stone vessels in lower debris along west wall.

Cleared slope leading from ramp of fore court to III 1. Built of stone. Cleared foundation stones of fore court showing temple was planned as upper temple with portico of pillars.