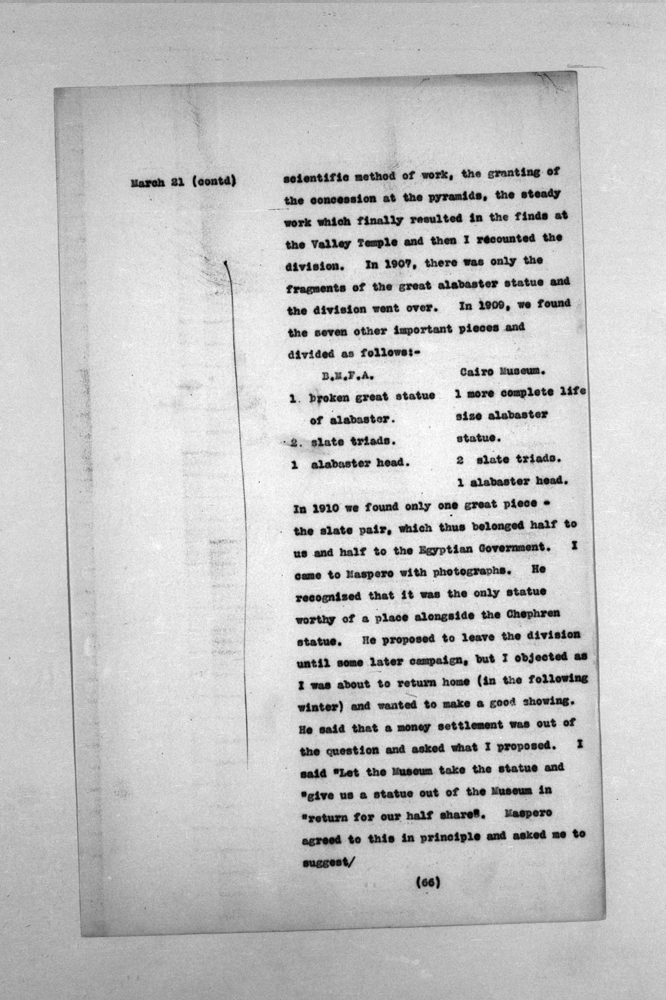 method of work, the granting of the concession at the pyramids, the steady work which finally resulted in the finds at the valley temple and then I recounted the division. In 1907, there was only the fragments of the great alabaster statue and the division went over. In 1909, we found the seven other important pieces and divided as follows:-
Boston Museum of Fine Arts:
one broken great statue of alabaster [MFA 09.204]
two slate triads [MFA 09.200, MFA 09.201 deaccessioned]
one alabaster head
Cairo Museum:
one more complete life-size alabaster statue
two slate triads [JE 40678, JE 40679]
one alabaster head
In 1910 we found only one great piece, the slate pair [Menkaure greywacke pair statue = published no. 17 = 10-1-16 = MFA 11.1738], which thus belong half to us and half to the Egyptian government. I came to Maspero with photographs. He recognized that it was the only statue worthy of a place alongside the Khafre statue. He proposed to leave the division until some later campaign, but I objected as I was about to return home (in the following winter) and wanted to make a good showing. He said that a money settlement was out of the question and asked what I proposed. I said "Let the museum take the statue and give us a statue out of the museum in return for half our share". Maspero agreed to this in principle and asked me to suggest