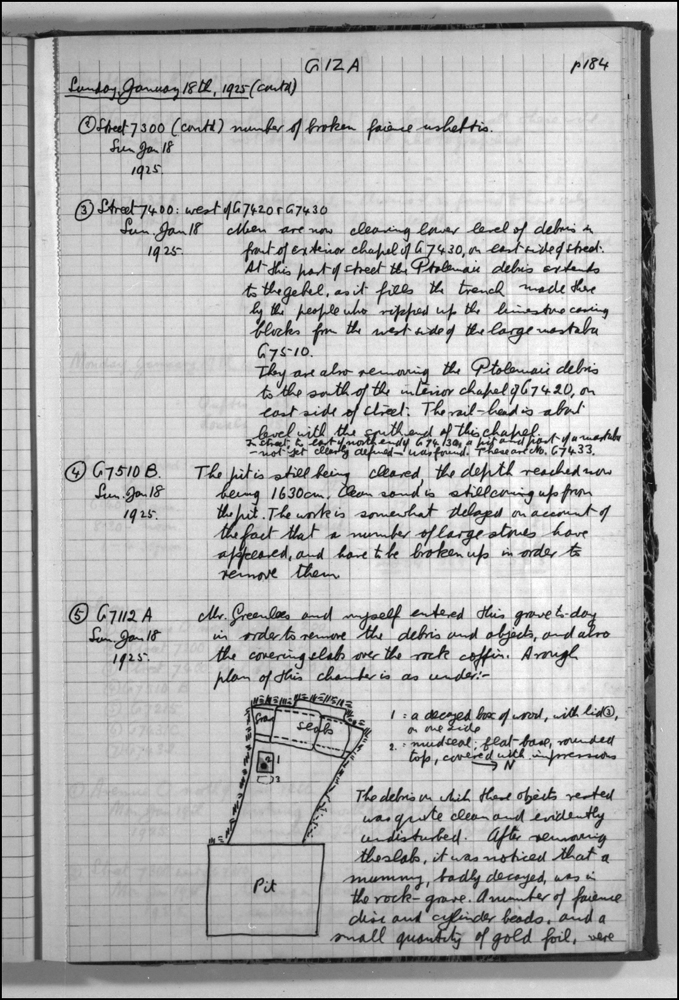 (3) Street G 7400
Street G 7400: west of G 7420 and G 7430.
Men are now clearing lower level of debris in front of exterior chapel of G 7430 on east side of street. At this part of street the Ptolemaic debris extends to the gebel as it fills the trench made there by the people who ripped up the limestone casing blocks from the west side of the large mastaba G 7510.
They are also removing the Ptolemaic debris to the south of the interior chapel of G 7420, on east side of street. The railhead is about level with the south end of this chapel.
In street, to east of north end of G 7430 a pit and part of a mastaba not yet clearly defined was found. These are No. G 7433.

(4) G 7510
G 7510 B: The pit is still being cleared, the depth reached Now being 1630 cm. Clean sand is still coming up from the pit. The work is somewhat delayed on account of the fact that a number of large stones have appeared, and have to be broken up in order to remove them.

(5) G 7112
G 7112 A: Mr. Greenlees and myself entered this grave today in order to remove the debris and objects and also the covering slabs over the rock coffin. A rough plan of this chamber is as under:

1 = a decayed box of wood, with lid (3) on one side
2 = mud seal; flat base, rounded top, covered with impressions

The debris on which these objects rested was quite clean and evidently undisturbed. After removing the slabs, it was noticed that a mummy, badly decayed, was in the rock-grave. A number of faience disc and cylinder beads, and a small quantity of gold foil, were