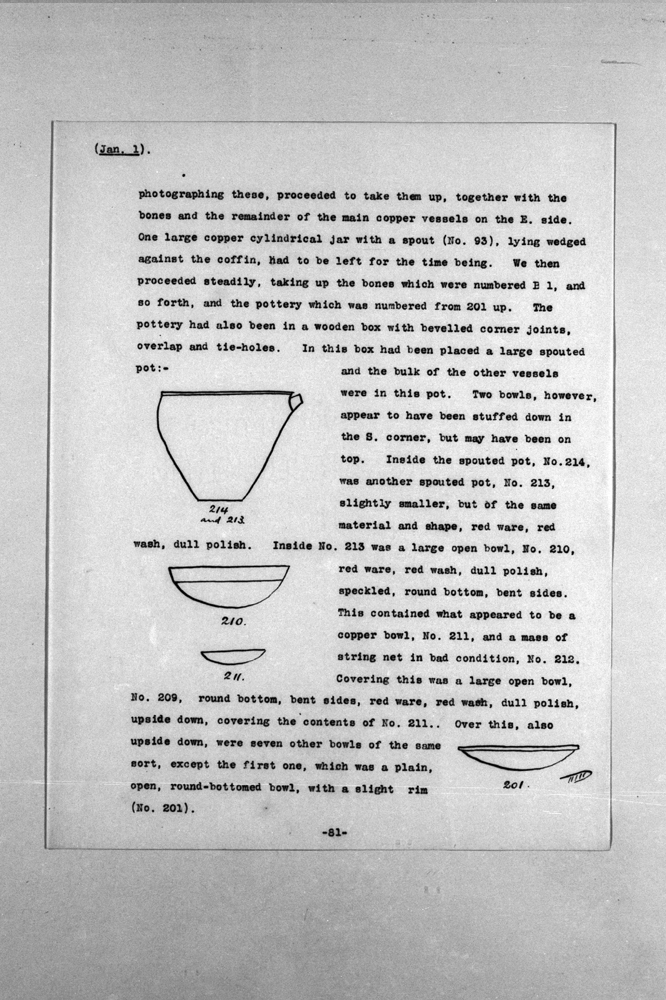 [G 2381 A, continued]
photographing these, proceeded to take them up, together with the bones and the remainder of the main copper vessels on the east side. One large copper cylindrical jar with a spout (No. 93), lying wedged against the coffin, had to be left for the time being. We then proceeded steadily, taking up the bones which were numbered B 1, and so forth , and the pottery which was numbered from 201 up. The pottery had also been in a wooden box with beveled corner joints, overlap and tie-holes. In this box has been places a large spouted pot: [ILLUSTRATION], and the bulk of the other vessels were in this pot. Two bowls, however, appear to have been stuffed down in the south corner, but may have been on top. Inside the spouted pot, No. 214, was another spouted pot, No. 213, slightly smaller, but of the same material and shape, red ware, red wash dull polish. Inside No. 213 was a large open bowl, No. 210 [ILLUSTRATION], red ware, red wash, dull polish, speckled, round bottom, bent sides. This contained what appeared to be a copper bowl, No. 211 [ILLUSTRATION], and a mass of string net in bad condition, No. 212. Covering this was a large open bowl, No. 209, round bottom, bent sides, red ware, red wash, dull polish, upside down, covering the contents of No. 211. Over this, also upside down were seven other bowls of the same sort, except the first one, which was a plain open, round-bottomed bowl, with a slight rim (No. 201) [ILLUSTRATION].