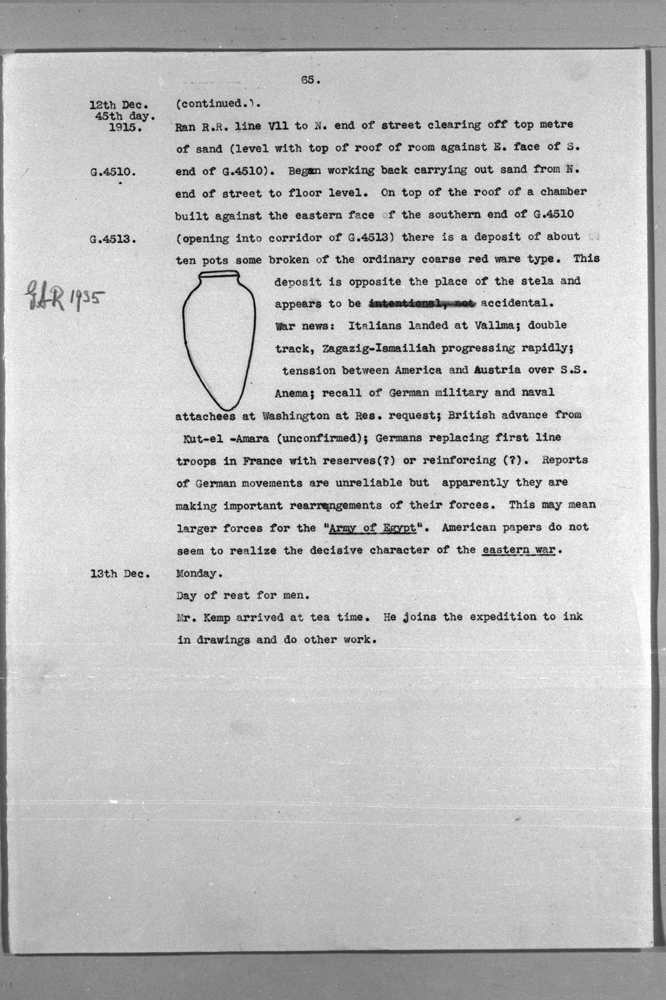 [Work confined to street east of G 4510 (continued)]
Ran railroad line VII to north end of street clearing off top meter of sand (level with top of roof of room against east face of south end of G 4510). Began working back carrying out sand from north end of street to floor level. On top of the roof of a chamber built against the eastern face of the southern end of G 4510 (opening into corridor of G 4513) there is a deposit of about ten pots some broken of the ordinary coarse red ware type [ILLUSTRATION]. This deposit is opposite the place of the stela and appears to be accidental.

War news: Italians landed at Vallma; double track, Zagazig-Ismailiah progressing rapidly; tension between America and Austia over S.S. Anema; recall of German military and naval attaches at Washington at Res. request; British advance from Kut-el-Amara (unconfirmed); Germans replacing first line troops in France with reserved (?) or reinforcing (?). Reports of German movements are unreliable but apparently they are making important rearrangements of their forces. This may mean larger forces for the "Army of Egypt". American papers do not seem to realize the decisive character of the eastern war.

Day of rest for men.
Mr. Kemp arrived at tea time. He joins the expedition to ink in drawings and do other work.