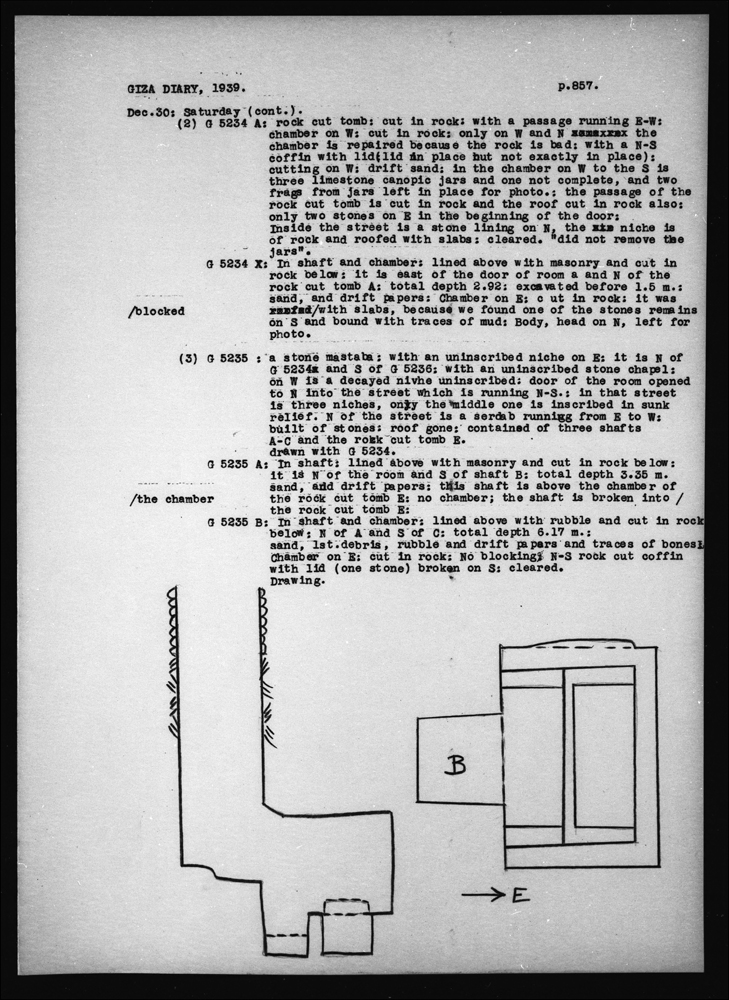 (2) G 5234 (continued)
G 5234 A: Rock cut tomb. Cut in rock. With a passage running east-west. Chamber on west. Cut in rock. Only on west and north the chamber is repaired because the rock is bad with a north-south coffin with lid (lid in place but not exactly in place). Cutting on west. Drift sand. In the chamber on west to the south is three limestone canopic jars and one not complete, and two fragments from jars left in place for photo. The passage of the rock cut tomb is cut in rock and the roof cut in rock also. Only two stones on east in the beginning of the door. Inside the street is a stone lining on north, the niche is of rock and roofed with slabs. Cleared. "Did not remove the jars."

G 5234 X: In shaft and chamber. Lined above with masonry and cut in rock below. it is east of the door of room a and north of the rock cut tomb A. Total depth 2.92. Excavated before 1.5 meters. Sand, and drift papers. Chamber on east. Cut in rock. It was blocked with slabs, because we found one of the stones remains on south and bound with traces of mud. Body, head on north, left for photo.

(3) G 5235
A stone mastaba with an uninscribed niche on east. It is north of G 5234 and south of G 5236 with an uninscribed stone chapel. On west is a decayed niche uninscribed. Door of the room opened to north into the street, which is running north-south. In that street are three niches, only the middle one is inscribed in sunk relief. North of the street is a serdab running from east to west. Built of stones. Roof gone. Contained of three shafts A-C and the rock cut tomb E. Drawn with G 5234.

G 5235 B: In shaft and chamber. Lined above with rubble and cut in rock below. North of A and south of C. Total depth 6.17 meters. Sand, limestone debris, rubble and drift papers and traces of bones. Chamber on east. Cut in rock. No blocking. North-south rock cut coffin with lid (one stone) broken on south. Cleared. Drawing.